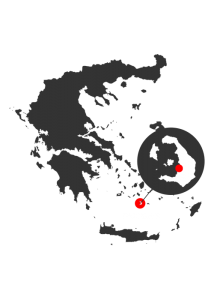 The ancient Strongili, which means « round » in Greek, was first inhabited around the 5th millennium BC. The volcano that gave birth to the island has been quiet until around 1630 BC, when a huge eruption covered the entire island, burying all traces of civilization and forming an ash and lava crust of over 30 meters. Today the soil of Santorini is almost entirely of lava origin, and the abundance of pumice makes it extremely porous and highly capable of retaining water. The climate is extreme: with very little rainfall, constant winds and great temperature ranges between day and night.

Union of Santorini Cooperatives – SantoWines was founded in 1947 to protect and develop the fascinating viticulture that has developed within the microclimate of Santorini, one of the most unique and difficult in the world. A microclimate that has required winemakers to develop techniques and acquire vine farming knowledge that are now recognized as an integral part of the uniqueness and typicality of the wines produced here.

Today, Union of Santorini Cooperatives is the largest organization on the island representing all growers, with 1,200 active members. SantoWines is committed to safeguarding the local traditional agriculture that produces Santorini PDO, promoting sustainable agricultural development, innovation and trade. SantoWines invests in the development of cultivation and winemaking techniques aimed at the conservation of biodiversity, also by maintaining a plant nursery for local varieties: a solid foundation for the preservation and experimentation on the cultivation of local grapes.

Santorini Assyrtiko and Santorini Nykteri are recognized as PDOs

Inauguration of SantoWines social winery in the village of Pyrgos

is the main grape variety of the denomination