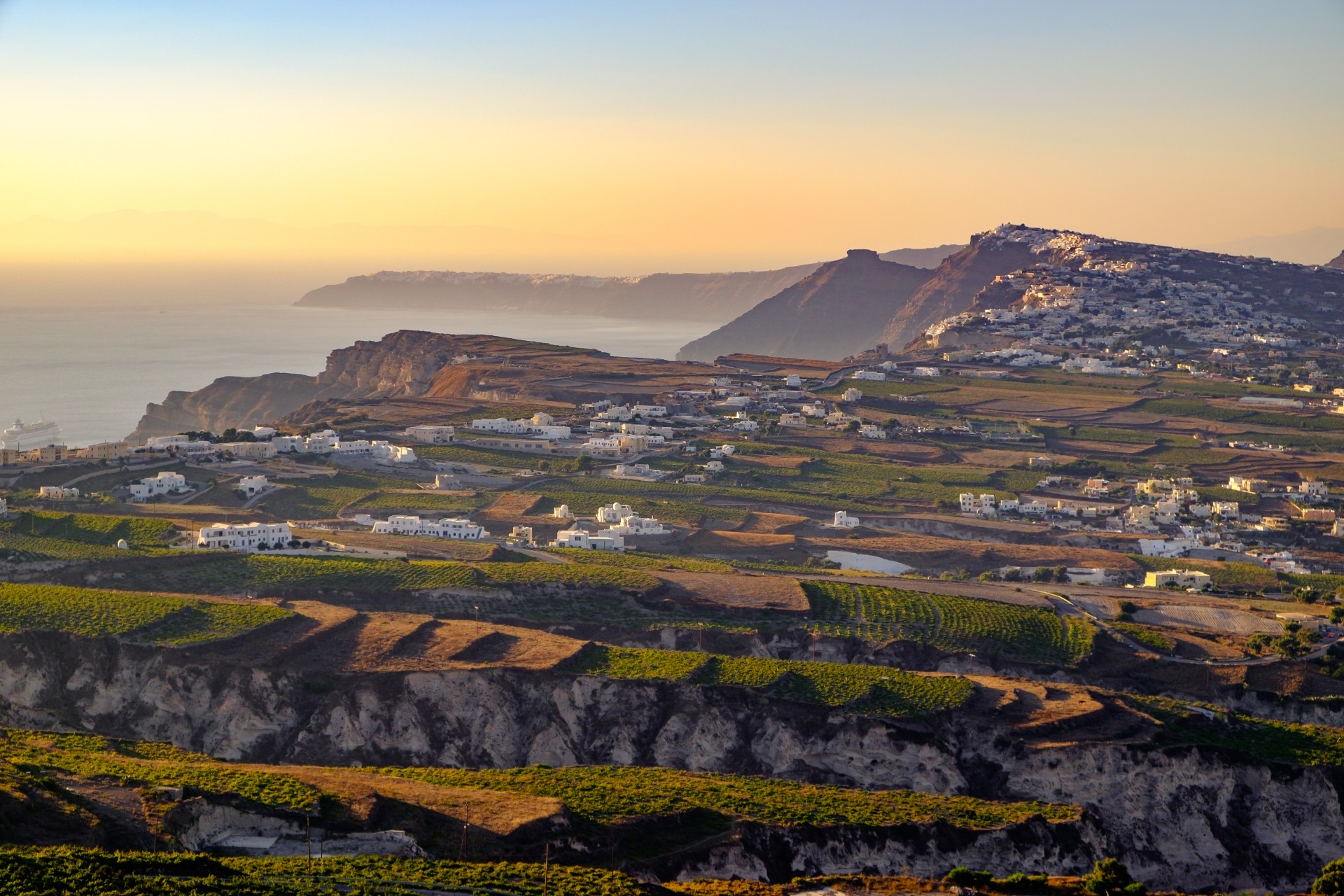 The volcanic eruption of Santorini shocked the Mediterranean and changed its history. The devastating explosion transformed the shape of the island into what it is today… the cradle of volcanic viticulture, producing world-class PDO wines.

After talking about the terroir of Soave and the Lessini Mountains, we will now explore one of the most extraordinary places in the Mediterranean, the island of Santorini. The island’s soils are a result of the legendary explosion of the ancient volcano over 3,600 years ago. Geologists estimate that in 1650 BC, the devastating eruption of Thera (ancient name of Santorini) reached a level of between 7-8 on the Richter Scale. It was one of the most powerful volcanic eruptions in the last 10,000 years, equivalent to the power of 50,000 Hiroshima atomic bombs.

Experts believe that the destruction of Santorini gave birth to the legend of the lost city of Atlantis, mentioned in Plato’s works, written a thousand years later. The eruption may have influenced the biblical account of the plagues of Egypt and contributed to the decline of the Minoan civilization to the south. The city of Akrotiri, covered under meters of lava is still under excavation on the south end of the island and is considered the “Pompeii of the Ancient Aegean.”

The eruption not only changed the course of history, but also the shape of the island, covering it with volcanic ash, rich in minerals, with almost no organic components. The soil is a mixture of volcanic ash, pumice stone, pieces of solidified lava and sand, which together make up the singular soil of Santorini known as “aspa.”The soil is porous and light, devoid of clay, which allows it to retain moisture from the dew, rainfall and humidity of the sea, as well as resist Phylloxera.

The island has a typical Mediterranean climate, with relatively warm winters and dry summers. The proximity to the sea regulates the temperature and serves as moderating influence. However, rainfall can be very scarce and during the hot summers, the only source of water is the sea mist that envelops the island during the evening and morning hours. Strong, cool northern winds, (meltemia)  blow during the hot summer months, (often exceeding 80 km/h), which help keep away diseases and bring cool evening temperatures to the island and relief to the vines.

Faced with such extreme conditions, the growers had to find new ways to adapt, and in order to withstand the strong winds and hot summers, the vines were grown on top of the ground using a unique pruning method to create a “kouloura” (or woven tree). This method consists of weaving some of the new, and most resistant vine shoots of the plant, into the shape of a basket that rests directly on top the soil, which is repeated yearly. The grapes are then trained to grow inside the baskets to protect them from the wind and sun. 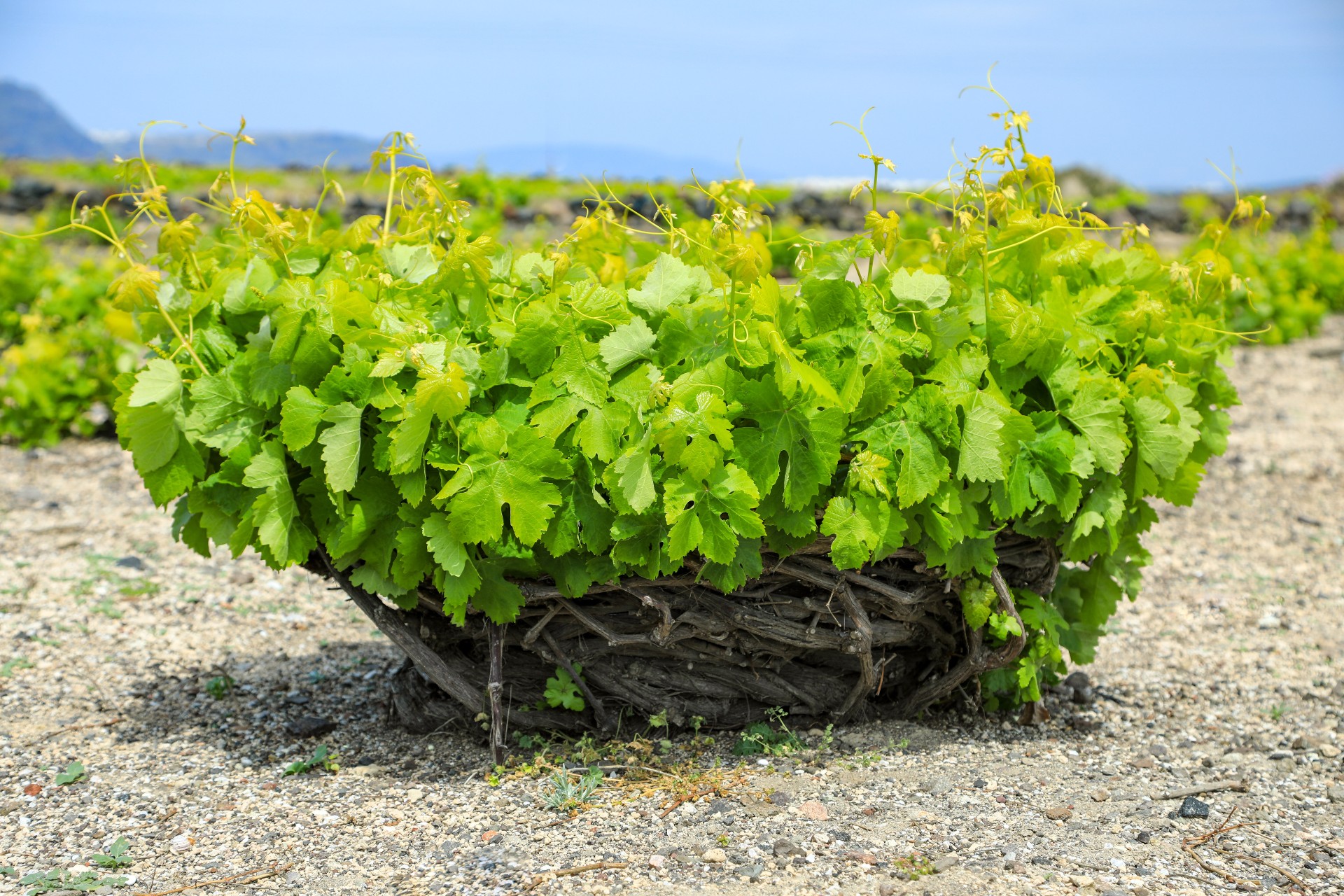 Despite being a great challenge for the growers, the volcanic soils of Santorini have never experienced the blight of Phylloxera, due to the lack of clay in the soil. Because of this, the vines have never been grafted, making Santorini, some say, the oldest vineyard under continuous cultivation in the world, with some of the root stock several centuries old. Grape yields are extremely low, given the age of the vines, the volcanic soils, the lack of water and the strong winds. But, this results in wines with exceptional complexity, concentration and richness, with long-aging potential. Normal yields are close to 20-25 hl/ha (half of those in Bordeaux!), and often lower than 10 hl/ha.

Assyrtiko is Santorini’s main grape variety covering 70% of the islands total vineyard area. Santorini is also home to more than 30 other varieties native to the island. This most noble of white grapes, Assyrtiko has evolved over millennia to thrive in the volcanic environment, becoming resistant to drought and diseases. It is one of the few Mediterranean grapes able to maintain high levels of sugar and acidity (pH between 2.8-3.2) at the same time, also giving the wines long aging potential. Assyrtiko produces full-bodied, dry white wines with citrus aromas, combined with a distinct mineral character. Assyrtiko is also blended with native Athiri and Aidani grapes to produce one of the world best sweet wines, Vinsanto, which also had its origins in Santorini.

PDO wines classified as «Santorini» include Assyrtiko, which can be vinified by itself or blended with up to 25% of a mixture of Athiri and Aidani, which can also be used individually. In addition, there are the classifications of Nykteri Santorini PDO and Vinsanto Santorini PDO. Nykteri is a traditional Santorini wine made with grapes that are late harvested to reach an alcohol content between 14 and 16 degrees and a distinct sugar residue. This wine undergoes aging in barrel of at least 3 months. Vinsanto is a natural made sweet wine from sundried grapes that are left in the sun for 8-12 days. The sugar concentrations range between 340 and 500 grams/liter. The wines must be aged in barrel for a minimum of 24 months, even though most Vinsanto wines are released on the market after five years and continue to improve and develop complexities for decades.

Complex terroirs for exceptional products: the DOPs promoted by HEVA
Heva Flies to the Netherlands
See you at the Merano Wine Festival