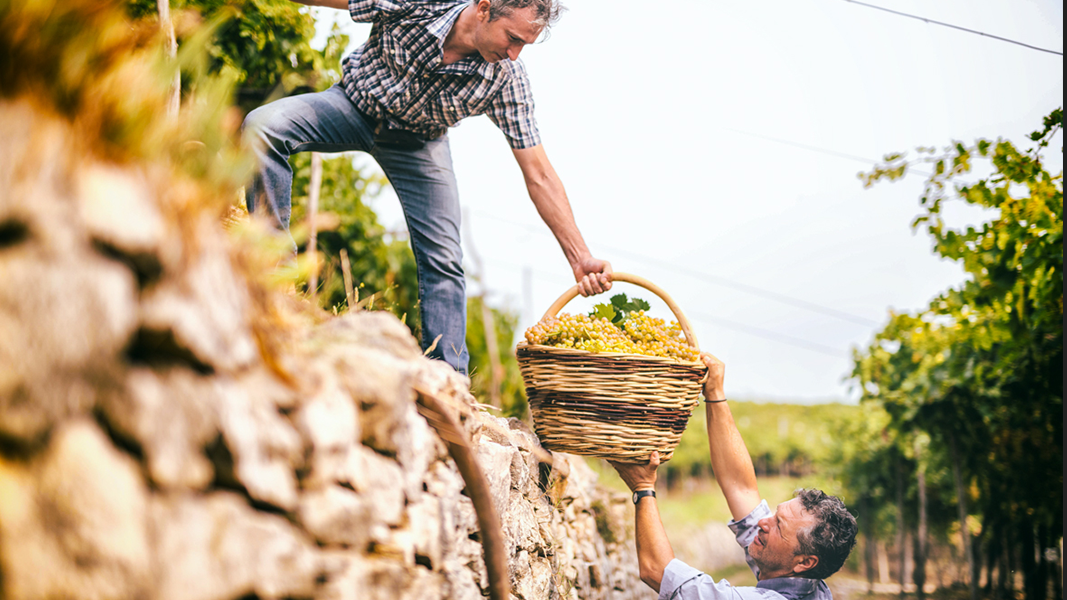 With 7,000 hectares of vineyards, Soave represents the largest Italian white wine production district. The Soave and Soave Superiore PDOs are an Italian excellence that come from volcanic soils, employing 3,000 families of winemakers, and are exported to 68 countries.

The wine-growing district of Soave covers over 12,000 hectares, of which 7,000 are planted with vineyards, in the province of Verona. We are in a hilly area north of the E70 – Serenissima highway, between the 18th and the 25th km, between Verona and Vicenza, which climbs towards the northern hills of Lessinia: an area with a mild climate, characterized by winters that are not too harsh and temperate summers.

The hills of Soave are made up of volcanic soils and limestone sediments (which will be covered in another post) with singular landscape features: high hills that rise above flat valleys, characterized by the typical terraces: an element of uniqueness that has led Soave to lay the foundations and lead an international movement of territories and wine products united by this identity trait, the Volcanic Wines.

The main variety of Soave is the Garganega, a native grape with thick skin, endowed with an impressive natural aromatic background (with almond and white flowers standing out) and a lengthy vegetative development, enough to reach maturity in October. The main PDOs of this area are made with the Garganega: the white Soave and Soave Superiore wines. Other varieties cultivated in the area are Trebbiano di Soave, Chardonnay and Pinot Grigio.

From “Typical wine” to the UGAs

The vineyard of Soave represents more than 3% of the denomination-based productive system in Italy. More than 3,000 winegrowing families work these slopes, doing a “heroic” job, for a production of over 48 million bottles, exported in 68 countries worldwide.

But the peak of recognition was reached the following year. In 2019, the Italian Ministry of Agricultural, Food and Forestry Policies approved the adoption of the Unità Geografiche Aggiuntive (UGA), officially dividing the area of Soave in 33 crus, which identify and promote the most prestigious and historic vineyards of the denomination. The UGAs, fruit of a long and detailed work of zoning that started in the early 2000s by the Consorzio di Tutela, are the last piece of a century-old work of territorial enhancement that has elevated Soave to becoming one of the most important Italian vineyards for the bond that it has established between man and nature, between landscape and wine production: aside from Soave, Barolo, Barbaresco and, more recently, Roero are the only ones who have completed such a vast and ambitious zoning of their wine territory.

The Soave and Soave Superiore PDOs

The Soave PDO produce both still and sparkling wines. They are made with a minimum of 70% of Garganega and 30% of Trebbiano di Soave or Chardonnay. Within the 30%, only a maximum of 5% of other white varieties traditionally cultivated in the area is allowed. Soave is a white wine with a pale straw yellow colour that tends to green. The nose is delicate, intense and fine, while the flavour reveals all its “volcanic” nature: marked minerality, persistence and sapidity are the main qualities, all well-balanced by an elegant and complex structure.

While maintaining all the characteristics of the wine described above, the Soave Superiore PDO is the highest expression of quality and terroir, with the only difference of not allowing the use of Chardonnay and having a lower number of yield permitted. Furthermore, it is produced in a more restricted cultivation area that corresponds to that of Soave Classico and Soave Colli Scaligeri. Soave Superiore PDO cannot be marketed until April of the year following the harvest, and “Riserva” wines are not marketed until November, or about a year after the harvest. Compared to Soave, the Superiore must have a more golden colour and stronger aromas with floral notes. Flavour is fuller and more intense.

The soil of Soave, wonderful and complex
Discovering the Soave and Soave Superiore PDOs
Nature and volcanoes, the uncontaminated terroir of Lessini Durello